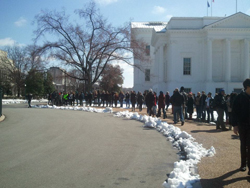 On Monday, February 20th, over 1,100 people turned out in one of the largest demonstrations to happen in Richmond in decades, to show their opposition to a series of anti-choice and “anti-women” bills that have been working their way through the Virginia General Assembly. “Speak Loudly With Silence” was the brain child of APV board member Claire Tuite and others. It brought people from across the state together at the Capitol in Richmond to stand as mute witnesses to the ongoing war on women’s reproductive rights being waged by the state’s Republican majority. On a cold and windy morning state lawmakers walking from the General Assembly building to the nearby Capitol were met by over a thousand silent watchers who lined the walkways between the buildings. It was a powerful and moving message that we sent, that we are watching what they do and that we don’t like it. In our conversations with Delegates and Senators later in the day it was clear that message got across loud (or silently) and clear. APV has been involved from the start in the fight to stop restrictive, unnecessary and punitive legislation that would wipe away decades of progress on women’s health and reproductive rights here in Virginia. We are very proud of Claire and the work she has done on behalf of women in the Commonwealth and our membership were well represented in the large crowd. Thanks to everyone who came out and to the many organizations and individuals working to turn back the tide of ignorance and fear that threatens to make Virginia one of the most repressive states in the nation on women’s rights. 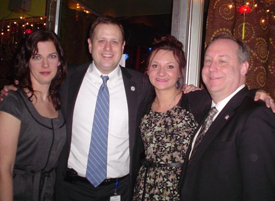 On February 13th, the day before Valentine’s Day and the next to last day for the General Assembly here in Virginia to pass bills before crossing over to deal with legislation from the other chamber, APV’s Monday Salon was pleased to welcome Delegate Patrick Hope of Arlington. Del. Hope came straight from the House floor and spoke and took questions from the audience for an hour. On behalf of the APV board of directors, I want to thank Patrick for coming to see us after such a long and frustrating day. (Photo: Stephanie Rodriguez, Del. Patrick Hope, Darby Lawes & Scott Price) 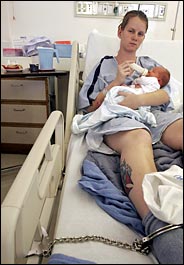 Our New Year’s online fund-drive was a smashing success. APV had aimed to raise $1.000 in ten dollar increments over the course of the month. With your help we made that number with days to go. THANK YOU all very much for helping us spread a progressive message here in Richmond at the General Assembly and in Congress. 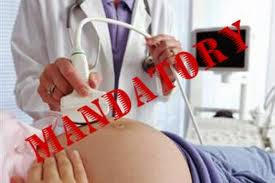 This bill was read on the floor Friday, it will be debated on Monday and the final vote will be Tuesday. The Senate will be in session from 12 noon on. The bill will be debated at some point as part of “bills on second reading, regular calendar”. You can watch the debate on the internet here. The vote will be very close and we need Democrats to hang together on this. Thanks.

Update: Thank you to all who lent their support and signatures. Unfortunately, this bill was passed 21 to 18 on Wednesday, February 1st. This is very disappointing, but not unexpected with this General Assembly. We will continue to fight bills in the GA that we feel endanger the rights of women. We will not give up and we will make your voices heard. The tide will turn.