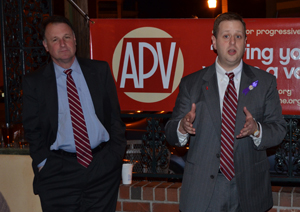 Thursday, February 23rd was a big day in Virginia politics as we witnessed the power that strong lobbying coupled with mass protest can have. We succeeded in convincing our friends across the aisle to do away with the so-called personhood bill that had helped make Virginia something of a national punchline. Thursday was also the date of APV’s legislative Oyster Roast. It’s been a long, hard session, but Thursday night we had a chance to exhale a little and relax with some of our friends and allies from the Virginia General Assembly. Special thanks to Delegates Joe Morrissey, Patrick Hope and Mark Keam and to Senator Creigh Deeds for attending and to all the staffers who came out to raise a glass and eat. Thanks also to Caliente restaurant for making us feel so at home and to their staff. (Photo: Senator Creigh Deeds & Delegate Patrick Hope address the crowd.)